Transformation of Work in Asia-Pacific in the 21st Century: Key Policy Implications 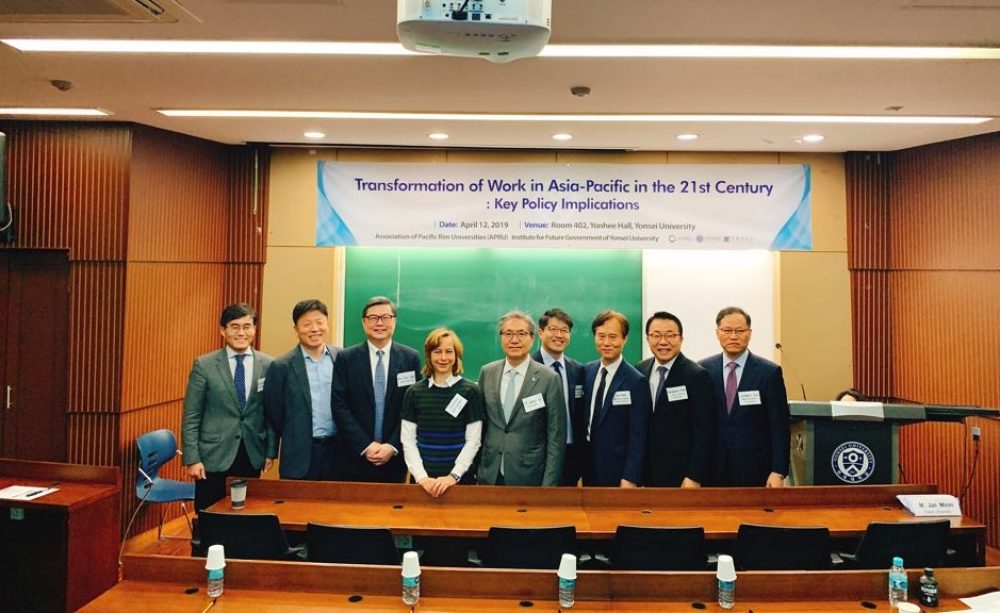 The Association of Pacific Rim Universities collaborated with the Institute for Future Government and released a study that analyzed how digital automation technologies would transform human occupations. A seminar highlighting the findings of the project “Transformation of Work in Asia-Pacific in the 21st Century: Key Policy Implications,” was held on April 12that Yonsei University.

With the development of Fourth Industrial Revolution (4IR), technologies such as artificial intelligence (AI) will impact the jobs of the future, for example, six in ten elementary school students today will work in new jobs that do not currently exist.

The project was conducted with six universities and one partnership including Seoul National University, Yonsei University, The Hong Kong University of Science and Technology (HKUST), The University of Tokyo, and UNSW Sydney, National University of Singapore and Asian Institute of Management to study how digital automation and the Fourth Industrial Revolution would transform the future of jobs. Professor Kar Yan Tam from HKUST stated, “By the year 2030, 85 percent of jobs are expected to disappear, and 65 percent of elementary school students today are expected to work in new jobs that do not currently exist.”

However, he added that “the job replacement rate will differ by industry. 88% of construction workers and 94% of accountants will be replaced by AI or automated systems, while 0.4% of elementary school teachers and less than 0.5% of counselors will be replaced.” This shows that the ripple effect of future technologies will have considerable gaps in each profession.

In a presentation titled “Digital Transformation and Impact on the Public Sector,” Professor M. Jae Moon from Department of Public Administration at Yonsei University stated, “Analyses of the correlation between the automation readiness index and per capita GDP and unemployment reveal that countries with better automation have lower unemployment and higher GDP per capita.” He added, “There is no need to fear the changes that future technologies will bring.” Professor Moon cautioned, “despite the positive contributions of automation, it will likely replace traditional jobs.” He added, “For this reason, governments worldwide should closely monitor the impact of automation and prepare appropriate policy measures.” In particular, he added, “Policymakers must combine labor, education, tax, and social welfare policies to mitigate the risk of social inequality due to automation.”

Professor Sunghoon Kim, also a project academic, from UNSW Sydney stated, “Based on analyses of the US unemployment rate from 1969 to 2015, technological change and unemployment were not clearly related.” He added, “Though technological development pushes out previous jobs, companies create new jobs.” He additionally stated, “Improving productivity reduces production costs, creating new demand and introducing new industries.” In particular, he said, “An analysis of manufacturing employment in Asia-Pacific from 1991 to 2017 showed a steady increase in employment and changes in technology consistent with employment growth.” Professor Kim added, “Governments should abolish relevant regulations to contribute to technology development. They must also prepare for increasing inequality and workforce casualization.”