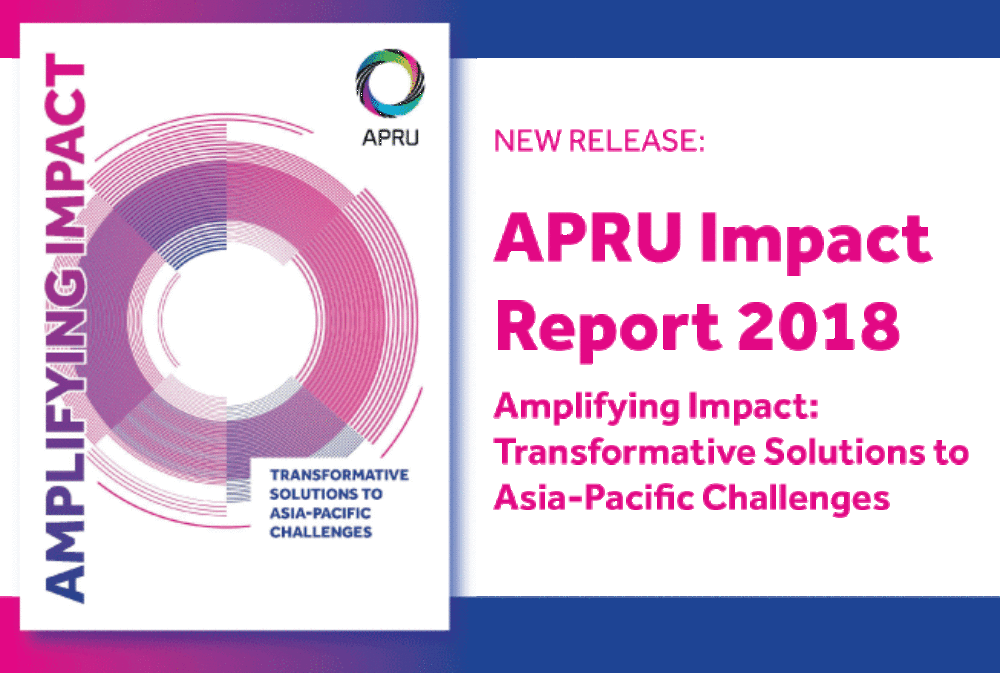 As the world becomes more nationalistic and the existing international order of multilateral cooperation is challenged, universities are forming regional and global research networks that do not mirror the current state of geopolitics, according to a new report by the Association of Pacific Rim Universities (APRU).

“Most nations now participate in international research networks rather than just a core of advanced economies,” says the report Amplifying Impact: Transformative solutions to Asia-Pacific challenges.

“These networks focus around topics or geographical regions or international relations contexts and are affected by factors such as equipment location (telescopes, particle accelerators), access to specific physical zones and resources, dispersal of talent and the financial opportunities of cooperation.”

Larger networks such as APRU can take on cross-disciplinary research on global challenges that feed into national and inter-governmental policy decisions, “even in spite of tensions between countries and the competitive pressures of commercial interests,” APRU Chair Gene Block, chancellor of the University of California, Los Angeles, says in the report published on 10 October.

APRU – a grouping of some 50 of the most prestigious research universities in Asia, the Pacific and the Pacific-facing Americas, including Mexico, the western United States and Canada, encompasses some 150,000 faculty.

In some disciplines, such as psychology and even arts and humanities, the APRU network brings together a “surprisingly high percentage” of the total regional research capacity, the report notes. More than 38% of APRU members’ research output is internationally collaborative, according to APRU’s own analysis of Scopus and other publications data.

This is far higher than the regional Asia-Pacific and global averages of 24% and 21% respectively, and just slightly higher than Europe’s 37.5% – even though the European Union has more “formal structures for joint science funding and integration and closer shared history and cultures”, the report notes.

International work receives greater visibility in academia and beyond, but this does not reflect the full value to society of such engagement, the report notes.

Beyond the EU, “there has been a huge expansion in open networks and researchers collaborating and they’re not just a mirror of geopolitical power, but seem to be focused around topics, the regions, and access to particular knowledge of complex international challenges,” APRU Secretary General Christopher Tremewan told University World News.

Issues that the network focuses on – such as climate change, disaster risk and recovery, human health, artificial intelligence and its impact on the labour force, sustainable cities, global health, women in leadership and ageing populations – transcend borders and cannot be solved by one country alone, he says.

In addition, “the complexity of these global issues requires new combinations of research and policy specialists. Collaborations are not just bilateral, which is the easiest way of doing cross-border or interdisciplinary research,” Tremewan says.

The network “brings together the social sciences and humanities with science and technology disciplines, combined with universities’ links to their own societies, to address global challenges”, Tremewan says.

For example, with developments in artificial intelligence and big data, “the social implications are unknown and likely to be pervasive,” says Tremewan. The impact of technology touches all areas of society and humanity, so including social science and humanities research can “lessen the chances of unintended consequences”, he adds.

Lessons for other research networks

The report is in part a review of APRU’s many collaborative projects, with almost 30 case studies providing lessons for networks elsewhere, in particular for cross-border and interdisciplinary research as well as across sectors to include industry, governments and non-governmental organisations.

Some challenges are simply too great or too costly for one organisation to solve alone, the report notes. The network’s sustainable cities, global health and ocean sustainability projects bring together capacity and resources from many institutions in the region.

APRU’s Global Health Program, in existence for over a decade, now has an established network of more than 1,000 researchers, policy-makers and professionals across the region, with more than 40 disciplines represented.

And it can help reduce the capacity gap. The report notes that APRU’s Global Health Program events are attended by lower- and middle-income countries and small states, connecting researchers and practitioners, as well as building data collection and collaboration systems in resource-limited settings.

Transboundary collaboration can lead to innovative solutions, such as APRU’s project on improving regional labour mobility to address population ageing – a collaboration between the University of New South Wales, University of Melbourne, Australian National University and Hong Kong University of Science and Technology. Its findings will feed into policy-making in the Asia-Pacific which combines countries with young populations with others where population is in steep decline.

Collaboration speeds up knowledge transfer between countries, and brings together complementary strengths, the report says, pointing to a project that combines robotics expertise from Osaka in Japan with psychology expertise from California to further understand human cognition.

The APRU secretariat has collated interdisciplinary scores for APRU institutions to monitor the increase in collaboration across disciplines.

This is based on U-Multirank data on citations for all publications from a given institution and the journal disciplines for specific issues.

“The further apart these disciplines are – such as biology and economics, for example, and the less common pairings and unusual combinations such as interdisciplinary work between STEM (science, technology, engineering and mathematics) and social sciences, the higher the score,” explains Kate Harland, director at Perspicuity Consulting in Vancouver, Canada, responsible for the report’s research and analysis.

Some have exceptionally high rates of collaboration with industry, such as APRU institutions in Japan and California. This is reflected in one in 10 of those universities’ papers being published in international journals in the period 2006-15, compared to a global average of around 1.7%.

Harland also notes an across-the-board rise in the collaboration rate between APRU institutions and governments – rising from 11% in the period 1996-2000 to around 15.4% in 2011-14. “It reflects the attempt to increasingly affect the policy process through evidence, and doing more co-creation of research to try to get the right questions at the right time rather than doing the work and pushing it into the policy area at the end,” Harland says.