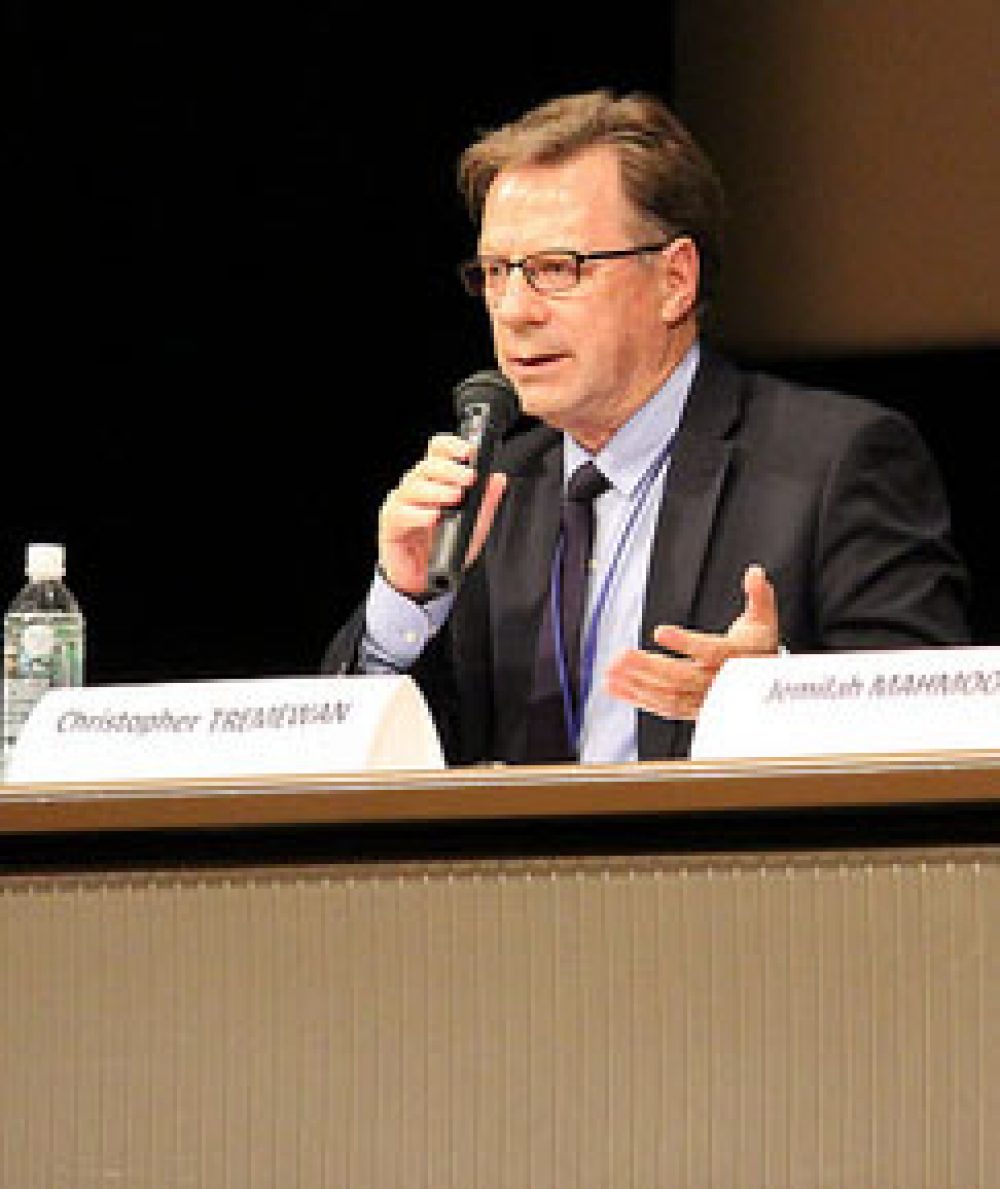 The Association of Pacific Rim Universities, or APRU, set up in 1997, is a consortium of leading universities in the Asia-Pacific Economic Cooperation, or APEC, area. It has a membership of some 50 top research universities in Australia, Canada, Chile, Mexico, New Zealand, Russia and the United States, as well as in Asia, including in China.

In January 2016 it established a secretariat in Hong Kong with Christopher Tremewan as APRU secretary general. In this interview with University World News Asia Editor Yojana Sharma, he highlights how APRU presidents and researchers sit around the table with governments, APEC, the United Nations, and other regional and international organisations, to influence and implement policies and provide much-needed research and other inputs to tackle major global and regional challenges.

UWN: Why have an Association of Pacific Rim Universities?

Tremewan: The inspiration for APRU came not from the Asia-Pacific but from the Pacific Rim. It was initially set up by four university presidents in California who realised that the integration of the Asia-Pacific economies was occurring at a great rate, and this should be paralleled in the way universities work together, specially – and this was 20 years ago – in the area of policy advice on big science and the development of research infrastructure in each of the Asia-Pacific Rim economies, which we now refer to as APEC (Asia-Pacific Economic Cooperation).

APRU’s inspiration was to be a policy mechanism at the international level, across the Pacific, between the Americas and Asia. We are connected by so many issues – the Pacific Ocean and Ring of Fire, and also by economic links in terms of trade. Most economies in this region have major trading relations across the Pacific, more perhaps with North America than with each other, at least in the past. So this is recognising the geostrategic, geopolitical and economic pattern across the Pacific.

UWN: What is the economic context now? There have been huge changes in the region.

Now we have the wonderful challenge of seeing if we can embed all kinds of relationships, not just across disciplines and university boundaries, but across national boundaries, bridging diversity of culture, language and economic well-being.

So the big issue of inequality within and between countries is something that really challenges such a network of universities because we produce huge technological innovations, some in the pipeline, some commercialised, some already applied, but we increasingly have a responsibility to ensure those innovations and benefits are shared with those who need them most and not only with those who can afford it, whether it is countries or individuals.

UWN: APRU is known for being outward looking. How did this come about?

Tremewan: APRU started in the higher education policy area benchmarking the way research universities are run, in terms of the best pedagogical methods and the best way to handle research. We have done a lot of work together in terms of how provosts, vice-presidents and researchers collaborate and in identifying the big challenges facing them.

We continue to do this but now we are far more outward facing – in some ways returning to our roots – looking at how we can aggregate the research and education competencies of our members to make an impact on public policy and bring demonstrable benefits to society. To that end we are establishing the evidence base of what our members are good at and which relate to the challenges this region is facing.

UWN: What is the main focus in terms of these regional challenges?

Tremewan: We have [as our members] the top 20 of the 1,000 institutions in the world that focus on issues relating to geophysical and hydrometeorological hazards. We also have the capability of the top 100 research institutions of the world among our membership.

Many of our universities and the cities they are located in are subject to natural and human-made hazards. We established the Multi-Hazards Program at Tohoku University, Japan, immediately after the triple disaster in Fukushima. Sendai, where Tohoku is based, was in the eye of the storm.

Before that, we established a network on global health. This region faced the SARS virus and other health challenges. We were already looking at non-communicable diseases, pollution and so on. That grew out of our collaboration based at USC [University of Southern California], then we had a climate-change programme based in UC San Diego [University of California, San Diego] which has now morphed into a sustainable cities programme up in Oregon in the US.

These are programmes with a lead university and a core group of others and they develop a three- to five-year programme plan with specific outputs.

Tremewan: We collaborate with APEC on particular policies. They have an outfit called Policy Partnership on Science, Technology and Innovation. We are the only non-governmental member of that partnership.

We go to the senior officials’ meetings and sit around the table with governments. We are able to bring the insights of the major leading research universities into the policy-making process. We represent a significant proportion of the research and innovation capabilities of the APEC economies, that we have used for oceans and fisheries, on the APEC Human Resources Development Working Group and also the APEC Education Network.

UWN: A lot of people talk about the need for research to have more impact on policy so how is that managed?

Tremewan: We’re in the initial stages. I’ve been working on it now for three to four years. Since we moved to Hong Kong and brought together a skilled international team, we can work together in this way, so now we are beginning to see it become more productive.

All of our programmes bring together practitioners as well as researchers, companies and officials from government or local government. For example, at the APRU inaugural Sustainable Cities conference, in Portland a few months back, there were over 120 or so people, including researchers in sustainable city issues, practitioners such as planners, architects or transporters and along with them, policy-makers – from local government generally, and people from international organisations who are working on this, whether the UN or the ADB [Asian Development Bank].

UWN: How do you see this university-policy dimension developing in the future?

Tremewan: We anticipate a lot more traction. For example, APEC asked us for research working policy papers on labour mobility in the region. Our ageing population programme was able to bring together the academics to do that, and it is now being used by governments.

Some of the work we are doing on disaster risk reduction is through the Multi-Hazards Program based at Tohoku. We also launched a collaboration with [academic publisher] Elsevier on a global outlook in disaster science. Where is the research being done and how does this map onto where the disaster burden is greatest, mapping onto GDP per capita and so on?

We identify the gaps between the expertise and knowledge and the implementation and application to local situations and the resources to do that.

This is providing pathways to have impact which may not be immediate but we are producing a roadmap in many of these areas.

UWN: How is this different from governments working on an intergovernmental level? What does a university alliance bring to the table?

Tremewan: Governments approach us because they have been told, or civil servants have been told, to work with academia. In the past they would go to someone from the local university and get them on their government delegation and they would sit in the third row back. But now they say they need real policy capacity which comes from accessing the latest research globally from universities. When they talk to APRU, they are accessing 50 universities at the same time.

They need not only the research but the connectivity – not just a matter of downloading a report, but working together over time. From the beginning we help design the scientific challenges and questions in a way that can meet their needs once that process is completed.

So we are talking about a different way of working and engaging and it is a learning curve for all the partners involved – government, business and universities, because there are plenty of university academics who simply want to be left alone to do their research.

Now we are beginning to get a lot of attention and we are working with many partners and more commercial partners as there is a lot of interest from companies in the kind of work we are doing.