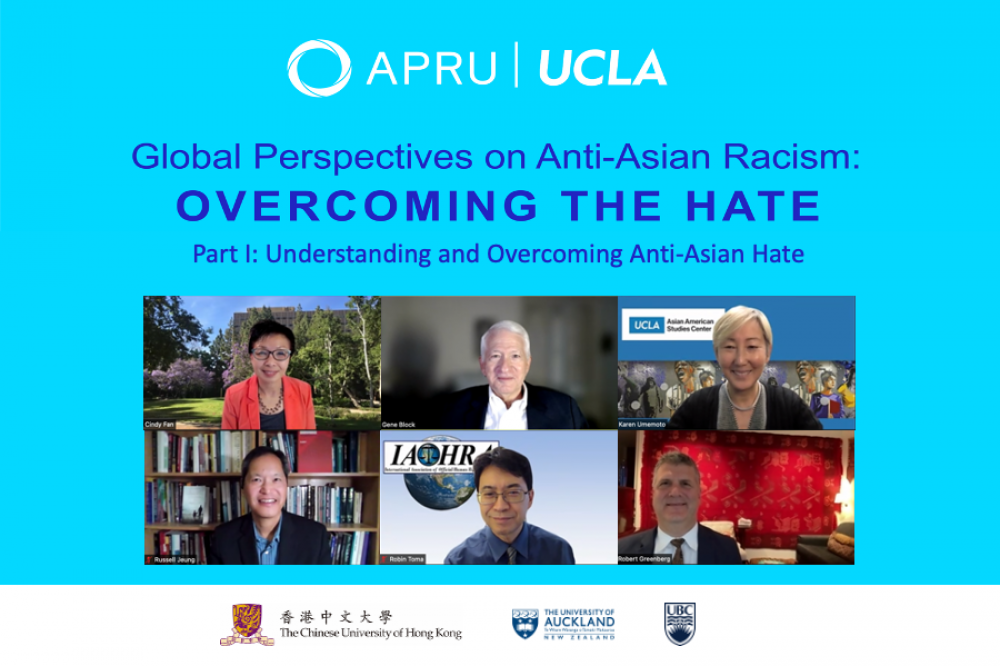 Hosted by APRU and UCLA in partnership with The Chinese University of Hong Kong, The University of Auckland, and The University of British Columbia on October 29, the event comes against the backdrop of former US President Donald Trump’s anti-China rhetoric triggering a wave of violence and animus against Asians in the US.

The Webinar helped attendees understand the ugly developments in the context of Asian American history and find ways to contribute to stopping them. Four distinguished speakers provided data and analysis, offered a comparative perspective, and shared effective interventions.

With the leadership of Prof Cindy Fan, Vice Provost for UCLA International Studies and Global Engagement, she opened the session with a dooming statistic noting that between March 2020 and June 2021, over 9,000 incidents were reported to the ‘Stop AAPI Hate’ website. Prof Fan also inspired hope by pointing out our collective goals to overcome anti-Asian hate across the world.

“By bringing together students, experts, academic and community leaders, APRU is creating a space to share knowledge and to address these difficult experiences across the Asia-Pacific region. This dialogue is designed to open doors for greater understanding of race-based hate, how it influences our daily lives, and how to overcome it,” Professor Cindy Fan said.

“We can set an example of better relations in our own campus communities and help people and policymakers understand and confront anti-Asian hate and other forms of racism in society,” he added.

Long History of Anti-Asian Hate in the US

Karen Umemoto, Helen and Morgan Chu Chair and Director of the UCLA Asian American Studies Center, likened the drivers of anti-Asian hate to the three elements of fire, namely fuel, oxygen, and heat. She explained that factors such as competition over resources; political favoritism; constructed stereotypes; and political opportunism victimizing one another, serve as the underlying contributors. Umemoto offered actions that we can take to overcome anti-Asian hate, including: creating a climate of support, educating ourselves and others against ignorance, standing up in solidarity, and getting involved in civic activities and training programs.

Reporting is rising in the US

The webinar explained that racism is rising and is more violent, with the most vulnerable being elders, women, and the very young. It was found that reporting is very difficult for victims, that there is a distrust in the police, and victims’ confidence that an appropriate response will take place is very low.

Russell Jeung, Professor of Asian American Studies, San Francisco State University and Founder of Stop AAPI Hate and also one of Time Magazine’s 100 most influential people of 2021, created a place where Asian Americans and Pacific Islanders could file firsthand accounts of racism they had experienced—the types of incidents that have long haunted these communities but gone unreported by government agencies and the media and unnoticed by others.

Prof Jeung pointed out that mental health support needs to include awareness about the trauma that results from hate events. Jeung noted that community resistance remains strong, especially with regard to social media, youth campaigns, and pop culture.

Robin Toma, Executive Director, Los Angeles County Commission on Human Relations and President, International Association of Official Human Rights Agencies, highlighted the LA vs Hate program, a community-driven approach to empower all residents of Los Angeles County to unite against, report, and resist hate. The webinars’ speakers warned that although much of the recent data on anti-Asian hate coming from the USA, it also reflects trends also in other countries.

Lessons from the Christchurch Mosque Massacres

Indeed, Robert Greenberg, Dean of the Faculty of Arts at the University of Auckland, recalled how the Christchurch mosque massacres in 2019 terrorized the country and the university, creating a culture of fear. Greenberg noted that racist, sexist, anti-Semitic graffiti appeared on campus immediately after the shootings, fueling tensions.

More information about the webinar series and speakers at here.
Revisit the Part I: Understanding and Overcoming Anti-Asian Hate recording at here.