APRU contributed to the 4th World Philanthropy Forum, held under the theme “Philanthropy in the Bay Area for A Better Life” in Shenzhen, China, 5-6 September.

While Wong and Xiao spoke on the development of the Guangdong-Hong Kong-Macao Greater Bay Area (GBA) from the perspective of leading research universities and the opportunities for them to contribute to this development, Cheung explained how a major charity aids the development of educational contribution to the GBA. 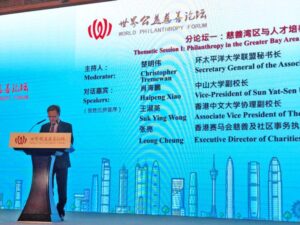 “We are fortunate to have eleven of the top universities in China among our 50 members, including three from Hong Kong SAR, and we are keen to support the development of the research and innovation ecosystem of Hong Kong and the Greater Bay Area,” said Tremewan.

“We are grateful for the opportunity to listen to leaders of organizations which are so crucial to the success of the Greater Bay Area scheme,” he added.

The panel discussions addressed some of the significant challenges coming along with ambitious infrastructural, integrating projects such as the GBA.

High on the list was the question of what can be achieved with new models of collaboration between research universities, business, government, and local communities. Well-being was another keyword, as the improved well-being of society over the long-term is obviously meant to be the fundamental reason for the GBA plan. The question of how success can be measured was also among the talking points, possible parameters being increased GDP, integrated transport, affordable housing, improved public health, lower carbon footprint, more educated and socially-concerned population, as well as political participation at the community level.

The 4th World Philanthropy Forum aspired to explore the role of different professional sectors in various aspects of philanthropy under the development of the GBA. It was jointly hosted by the Chinese University of Hong Kong (CUHK), the Chinese People’s Association for Friendship with Foreign Countries (CPAFFC), Tsinghua University, and the University of Hong Kong (HKU), and co-hosted by the Shenzhen Municipal People’s Government. It attracted over 300 guests from governments, enterprises, charities, tertiary institutions, and UN-related organizations of 22 countries and cities in Asia, Europe, North America, South America, and Oceania.

Since 2016, the World Philanthropy Forum has been held annually with commitment to promotion and implementation of philanthropic services, academic exchange, policy advocacy, and experience sharing of charities worldwide.