Analysis: how can Asia create equality for women at work?
01

Christina Schönleber, Director of Policy and Programs is quoted in article from CIPD 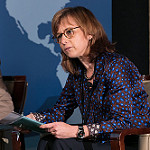 Asian economies may already be dynamic by global standards. But economists and other experts agree on one key point – they could be given an even bigger boost if women were empowered and offered equal opportunities in the workplace.

Illustrating just how much potential there is, the latest report from the McKinsey Global Institute found that advancing women’s equality in Asia could add US$4.5 trillion to collective regional GDP annually by 2025 – a 12 per cent increase over what it called the “business-as-usual trajectory”.

Indeed, this additional GDP would be equivalent to adding an economy the combined size of Germany and Austria each year. “Yet gaps remain large in many countries in the region on gender equality both in work and in society,” the McKinsey report says.

“From an economic perspective, trying to grow without enabling the full potential of women is like fighting with one hand tied behind one’s back,” the report adds.

Speaking to People Management, Richard Eardley, managing director at Hays in Asia, pointed out that a company can gain much from achieving more gender parity, as better decisions are made when men and women contribute equally.

He said a view can only truly be considered informed when the information received comes from a range and variety of sources, with gender diversity being a simple and straightforward means of creating diverse viewpoints in the decision-making process.

“There is an increasingly large body of research that points to a direct correlation between gender diversity and business performance, with start-ups having a better chance of survival, SMEs of growth and multinational companies of a better return when there is gender balance in the leadership,” Eardley said.

Despite this, women in Asia are still significantly under-represented at board level “and face more challenges and obstacles than men when it comes to starting a new business,” he added.

The barriers to career progression for women can be educational, economic and cultural, and the degree to which these obstacles exist will vary from country to country, he noted. Social expectations related to the role of women in society remain an underlying challenge for the region and one that clearly impacts development and opportunity.

Kishan Golyan, market intelligence specialist, Asia Pacific at The Adecco Group, said that when it comes to gender parity and developing and empowering women, Australia, New Zealand and Singapore, with its robust education system and social infrastructure, are seen as strong performers.

Vietnam, too, performs better than many other emerging and developed economies, with a higher representation of women serving as board directors and chief executive directors than Malaysia, Singapore or Indonesia, according to September 2017 data from the Boston Consulting Group.

“One of the biggest challenges that women face in the region is actually a societal one – lack of social equality, physical and legal security and better social infrastructure that would enable them to engage in more productive work and more value-added roles,” Golyan said.

“We need a holistic approach to empowering women spanning from social structures that help more women access or return to work opportunities to supporting women at work in making the step up to middle and senior management,” he added.

Richard King, senior managing director, Michael Page Japan, argues that clear leadership backing on the corporate diversity and inclusion agenda is important to ensure that any bias in decision-making – particularly around promotion – is completely removed.

He suggested business leaders, too, should foster environments that encourage male and female employees to discuss issues to help bridge obvious gaps, including pay and board representation.

“Sharing visible success stories is also important to showing progress within an organisation,” King said. “We have found that human stories are often more impactful than anything else in breaking down barriers, particularly on more sensitive topics.”

He pointed out that his business has a highly active [email protected] network that provides clear mentoring and sponsorship opportunities regionally and globally. Indeed, Michael Page has actively invested in returning mothers and the integration of family life into its business operations, said King.

Much can also be done on the educational front, experts suggest. Fang Lee Cooke, a professor of human resource management and Chinese studies at Monash University in Melbourne, noted that in Asian schools and universities, female students are still often channelled to social sciences, arts and humanity subjects, whereas men are more likely to take sciences, technology, engineering and medicine.

“Gender discrimination in recruitment and selection is widespread, and employees may be less likely to select female employees for training and development,” Cooke said. “As a result, women consist of a small proportion of senior leadership roles.”

Christina Schönleber, director of policy and programmes at the Association of Pacific Rim Universities (APRU), points out that the region’s stakeholders generally accept that the need for STEM (science, technology, engineering and maths) skills is increasing, given the demands of the so-called ‘Fourth Industrial Revolution’. The region’s overall talent shortage in STEM is currently 45 per cent, according to a report published in January by the International Labour Organisation (ILO).

“APRU is looking to address some of these pressing issues” through its Asia Pacific Women in Leadership (APWiL) programme, which aims to advance the participation of women in academia and research and address the gender gap in higher education, Schönleber said.

“There are many such initiatives that are all steps in the right direction, but the latest research also highlights that more needs to be done region-wide to translate investment in women’s education to an increased contribution by women to the workforce,” she added.